Tone of Tuesday 127: The Minister of the Environment

“We rich nations, for that is what we are, have an obligation not only to poor nations, but to all the grandchildren of the world, rich and poor. We did not inherit this land from our parents to do what we want with it. We have borrowed it from our children and we must ensure that we use it for their benefit as well as for our own. Anyone who does not recognize the fundamental validity of the proposition formulated in various ways by a growing number of writers, from Malthus to the Club of Rome, is either an ignoramus, a fool, or a villain.” Moss Cass, Australian Minister for the Environment, at the OECD, 13 November 1974

Anthony Albanese raised some eyebrows with the appointment of Tanya Plibersek to the Ministry of Environment and Waterrather than Educationthe portfolio where she had developed detailed policies during the long years of opposition.

The talkative classes of journalists at the Murdoch and Nine newspapers see it as a demotion; but I see it as a masterstroke, even if it wasn’t intended as such.

The Ministry of the Environment

“Climate change” is arguably the most intractable issue among those championed by Labor and the Teals in the recent election; (The ICAC and women’s issues could be addressed in this parliament, but achieving significant greenhouse gas reductions could take many more years). The Ministry of “Environment and Water” (Plibersek) will be as crucial as the Ministry of “Energy and Climate Change” (Chris Bowen). Labor is right to set them apart, in a contested space, unlike the LNP which lumped them together to put them aside.

We view the environment as central to our quality of life and are concerned about the continued threats of urban development, agriculture, mining, land clearing, etc. However, an “environmental portfolio” has not always been so important. Indeed, it has only been around for 50 years when “environment” was added to the Department of “Arts and Native Affairs” in the dying days of the McMahon government.

Elected in 1972, Gough Whitlam knew it was important but he was not invested; he noted it 26e out of 27 ministries (only ‘Science’ was lower) and gave it to Moss Cass, an avowed socialist, who had won Maribyrnong in Melbourne from the LNP. He was a most unusual ALP member, arguably the most progressive in Whitlam’s progressive ministry (in the foreground with a big beard).

Moss Cass was formidable. A doctor, son of refugees from Belarus, who were general practitioners. He had developed machines for heart-lung surgery bypass surgery and worked on community health with labor unions. He had very progressive views, supported abortion rights, the legalization of cannabis and the decriminalization of homosexuality while all three were illegal. He became politically inflamed and challenged Prime Minister Menzies and barked at him in the early 60s before being elected in 1969.

He went to the Department of Environment and Conservation (as Whitlam called it) with alacrity. It established the Environmental Protection (Impact of Proposals) Act of 1974, establishing a framework for the actions of the EPA in each state. In this he was, perhaps surprisingly, supported by Rex Connor, the minister later much maligned for overthrowing the Whitlam government in its attempt to nationalize our mineral wealth (if he had succeeded; we would be as rich as the Norway, with far fewer arguments and environmental damage).

Cass dropped the ‘conservation’ label, deeming it unnecessary, and went ahead with the single title ‘environment’. Despite his protests, Cass was unable to save Lake Pedder, but was instrumental in ending sand mining on K’gari (Fraser Island) and reducing uranium mining in Kakadu , and former leader Bob Brown credited his efforts with helping create the Greens. Moss Cass had amazing careers before and after politics, you can read about his extraordinary life in recently published obituaries to his death at 96 in February at SMH, Whitlam Institute, his son Dan Moss in the Saturday Paper and Guy Rundle in Crikey (who described the ministers pictured above as looking like Homicide Squad detectives).

In the 28 years the LNP has been in power since Cass’s time, the Department of Environment has been associated with Arts, Science, Home Affairs, Housing and Community Development. Robert Hill, the best of the PNL’s eighteen environment ministers, held the portfolio for more than five years, without the other additions, and with distinction.

More recently, the ministry’s position at the hands of the LNP has deteriorated under the leadership of Greg Hunt and Josh Frydenberg, due to the appalling approach taken by Sussan Ley to protect the reputation of the Great Barrier Reef rather than the reef himself. Never mind the coal and gas mines hastily approved before being forced out of office.

Under the 19 years of work, the names have continued to yo-yo, adding Sport, Tourism, Heritage, People, Communities, Sustainability and Territories to the mix. It seems the environment can never stand on its own, and it was hard to take the work of Barry Cohen, Graham Richardson and Ros Kelly in the Hawke/Keating governments seriously, despite some victories.

The Rudd/Gillard years saw three increasingly dedicated and capable ministers, first Peter Garrett, then Tony Burke and finally Mark Butler, who wrote a fairly comprehensive book on the Climate Wars. Which brings us to the current minister. Let’s not underestimate his task of undoing years of neglect by PNL: their repeal of endangered species accountability, their defense of gas and coal mines, and their lack of support for the Great Barrier Reef. Coral. 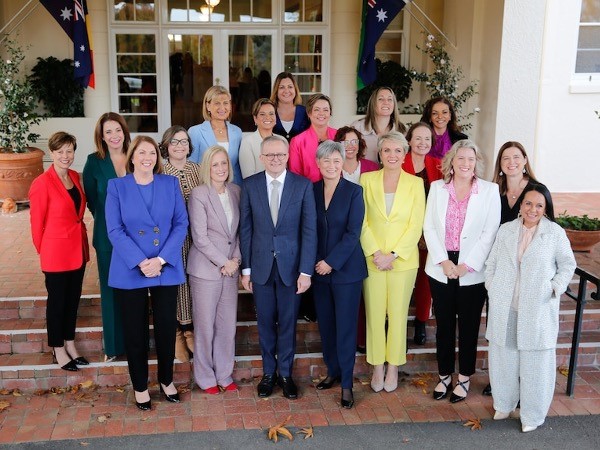 Tanya Plibersek, (in yellow in the Albanian women’s ministry), is one of the most capable in the new, extremely capable ministry. Maybe that’s why Albanese saw her as a threat and tried to bring her to her knees. Well, it’s to our advantage and to the environment. I predict she’ll be the best conservationist since Moss Cass.

Not doctor’s wives, but doctors

Small additional reflection on the relationship between doctors and the environment. Moss Cass was the first of several doctors to lead a charge for an “environmental movement”. Recently, several doctors have advocated for action on climate change; to see Dr Sophie Scamps Teal win at Mackellar, and the irony of Dr Monique Ryan ousting Josh Frydenberg, a former environment minister, cannot be lost on the LNP, who thought those voters were safe for them with “doctors’ wives”; turns out they were the doctors.

In 1975 Moss Cass swapped the environment ministry for the media, taking advantage of a furious four months before the Whitlam government was sacked. He began to establish SBS (Special Broadcasting Service). He founded the Australian Press Council (but repudiated his volunteer base), and when Rupert Murdoch called him “sinister” (meaning to himself), Cass hit back harshly, accusing the press of “bizarre distortion and hysterical over-reaction”. And he created 12 community radio stations, including 2SER in Sydney, 2RRR in Melbourne and 2XX in Canberra.

The latter launched my part-time career in radio. In 1977 I started with a weekly half hour show on 2XX about alternative technologies for the environment called ‘gentler paths‘, graduated from a rock and roll program called ‘A wop bop a loo bop, a lop bam boom‘, and was invited to the board (the only straight white man in ten – Moss would have loved this diversity.)

After this most enjoyable introduction, I became a radio commentator on issues of urban design and architecture. First on ABC Canberra (with Wendy Wicks); then occasionally for many years on ABC RN (with Geraldine Doogue and Alan Saunders); then weekly for nearly 10 years as one of the “Woodies” (later “Homies”) on Saturday mornings with Simon Marnie on ABC 702; more recently in podcasts on the Architecture & Design digital platform.

Vale Moss Cass. I am professionally indebted to him for his gargantuan innovations for the environmental movement, and personally grateful for my small media career.

Tone Wheeler is Principal Architect at Environa Studio, Adjunct Professor at UNSW and President of the Australian Architecture Association. The opinions expressed here are solely those of the author and are not owned or endorsed by A+D, the AAA, or UNSW. Tone does not read Instagram, Facebook, Twitter or Linked In. Sanity is preserved by only reading and responding to comments addressed to [email protected]