I teach the design process to people with very little design experience, in what we call the Design Gym. The response from our participants is always very positive. People, with this new knife of analytical thinking, feel excited and energized to go and use it in their lives, organize their thoughts, and approach their problems in a new way. When I tell other frameworks for non-designers to understand design better, the answers are sometimes controversial.

A few months ago, during an Interaction Designer meeting, I talked about what I do at Design Gym. A new friend protested categorically against the idea of ​​process. He insisted he had just come in, rolled up his sleeves and got the job done. He insisted that he had not followed any process. Plus, he ridiculed the process as being rigid and not fun. And in a way, he’s right: something is killed when you think about and describe what you’re doing. He feels that a certain freedom is being killed. But what is created?

A friend of mine from industrial design school recently invited me over to discuss her portfolio as she considered her employment options. She’s been working in a design-focused consulting firm for several years as a senior designer … and the feeling is that it’s time to start preparing for the next step. The consulting firm she works in doesn’t have an explicit process: companies turn to them for their branding power and aesthetics. So when showing the story of a project, there are too few pieces to talk about. There are a few sketches, then a few renderings, then the object. Which is a story, after all… but that doesn’t say the why or the how – the kinds of things employers say they like to see in portfolios. I think she realized this was a problem, which is why she asked me to help her find and tell her story, through the lens of the process.

What is created when we apply a process? When the process is used consciously, you have proof of work for every part of the design process. These groupings of work help tell the story of the project and the decisions made at transition points in the process. Now I think it’s important at this point to recognize that the process is, in a sense, a lie. Or at least an artificial designation. I like to illustrate this using a Nordic tale that I read as a child. Loki, the trickster god, made a bet with a dwarf while the two were in heated discussion, drunk on mead. Loki was so sure of his position that he put his head on the bet. Loki cheated on the bet, but still lost. The dwarf came to get it, and Loki’s friends were determined he wouldn’t give up the bet. Loki was placed on a chopping block and the Dwarf sharpened his ax. At the last minute, Loki protested loudly. The bet was for his head, which he said was clearly lost. But his neck was not demarcated in the bet. If his neck were damaged, the dwarf would violate the terms of the bet. The disagreement was brought to Odin, King of the Gods for resolution. Odin ruled in favor of Loki. He had to keep his head tied, so to speak, to his neck.

I teach a five phase design process. I advocate a phase of in-depth research which we call EXAMINE as distinct from an analytical or organizational phase which we call UNDERSTANDING. It’s fine to try to separate these two phases, but in actual design practice it can be difficult to tell when one phase ends and the next begins.

IDEATE stems from this analytical phase, giving us solid needs and goals to work on. Having great ideas and many of them feed into the prototyping phase of EXPERIMENT. The storytelling phase, what we call DISTILL, makes sure that we stop and that the work we have been doing has a memorable impact. When it comes time to talk about what you have done and what you plan to do next, you have artefacts and a clear reflection of the previous four phases that you can draw on in the service of your story.

These five phases make up a framework, and we NEED frameworks to help us process and think better. If I tell my students to “have ideas” or “solve certain problems creatively” it won’t work as well as giving them solid frameworks on how to think. I think designers need to regularly refresh their memory on good frameworks, stay sharp, and look at the work they do with a fresh eye. I recently had a conversation that brought me this home for me.

I was having lunch with a friend of mine from design school. He lives abroad and has worked for a major consumer electronics manufacturer for almost a year. Recently, he’s gone from sketching and rendering concepts on a daily basis to more forward-looking thinking, strategic work – design thinking, if you want to use that worn word.

Naturally, our conversation collided with the design process. I told him about the frameworks I teach people who come to my Design Gym classes. When I talked about what we teach for the “Experiment” phase, I described how we teach the basics of prototypes: that there are three basic types: Role, Look & Feel and Implementation and how to handle each one. ‘them. My friend stopped me and said:

Oh, that’s right … the paper “what are prototypes prototypes” [PDF]. I read that. 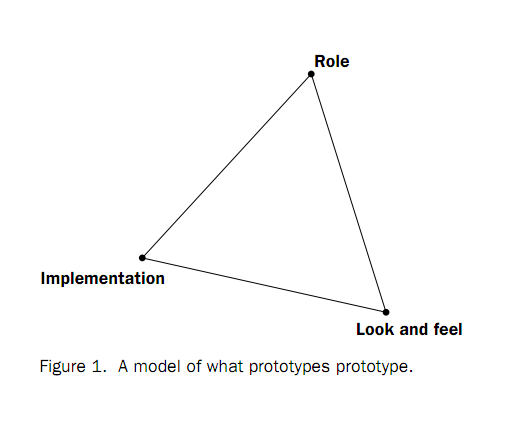 I then described one of the really juicy points of the article: the difference between the fidelity of a prototype and the resolution of a prototype. Loyalty is about the accuracy you think you have with the final product. Resolution is the amount of detail you need to put into the prototype to convey purpose or credibility. At this point my friend said:

I’ll have to review this.

I think we could all use another look at some great frames. My friend had a fleeting familiarity with this prototyping framework. He recognized it when he saw it. But when he saw how deep it was, he knew it might help his job. Make sure your team, boss, and test subjects know what they’re looking at, make sure you’re clear about what kind of feedback you’re asking for and why … it’s invaluable.

Those people who say they don’t use any process, they just do the job … honestly, I think that can be a recipe for disaster. When we work for others or with others, we need a clear plan, a map of the path we are going to take together and how we are going to get there. It’s not just customers who like to know when they’re going to see the second round and how much it’s going to cost … employees also like to know. People who say they don’t have a process are lying. They have, at least, a heuristic, a rule of thumb, a method, an approach. 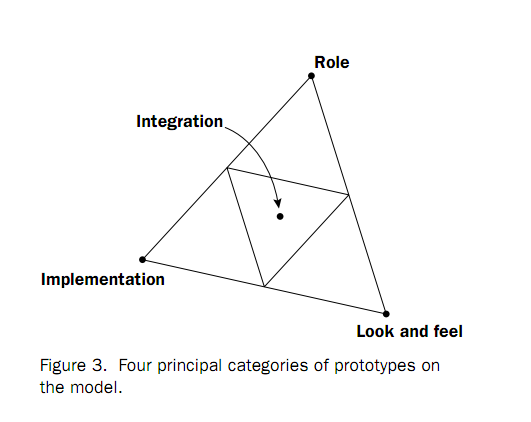 The article on prototypes goes on to describe this space in more detail, stating that the purpose of a series of prototypes is to point to the “real thing” with greater fidelity, to begin to integrate these three distinct foci of prototyping activity. We can start at one of the poles, but while we are working we have to come to the center. When we get to the center, to a prototype that represents what we really want to happen, we have a track, a track of all the prototypes we’ve made and all the feedback we’ve received on them. So we can be clear as to why this is so.

However, my friend who was working on her portfolio was in a particular mess. After years of rockstar-led design, they often only had one or two simple sketches, a render, and a finished product. They often jump straight to 3D CAD design after a quick 3D sketch and design sprint. Modifications made to the model are not preserved. They get it right and do what the customer wants and what the designer can offer: exceptional design. In my consulting experience, we always presented mid-phase options. Three to five directions, often defined or organized according to a user need or a design strategy.

Was this method better? Of course, my friend has produced a lot more work than me! But what they don’t have is a story. When I tell the story of the birth of my projects, I have my process to refer to. This is why I include storytelling as the last phase of the design framework that I teach. Having a framework means you can go back over what happened in the design process and have clearer compartments for what happened. Chunking is a great storytelling technique. After all, every story has a beginning, a middle, and an end. Knowing these parts of storytelling helps you tell better stories. Having a design framework doesn’t just help you design better, it helps you communicate what happened better. And if someone is paying for your design work, I guarantee they’ll appreciate being a little more inside your process.

Is the process a lie? A little. I don’t have a head or a neck, really. My fingers are not separated from my hands. But it helps to have a set of working definitions, rules of thumb if you will, to help guide the process and to help us see better. Adding a little bit of process to your process might help shake things up a bit.