On Composite and Interpreter Design Patterns

I often see references to the

design pattern in articles related to programming language design. this short article is here to help me remember what this model reference generally means, as well as documenting its relationship to the

the short wikipedia definition of the interpreter design pattern is:

on the page dedicated to the boss, it is also written:

the syntax tree of a sentence in the language is an instance of the composite model and is used to evaluate (interpret) the sentence for a client.

as a compiler hacker, this all sounds very familiar. indeed, if you’ve ever written an interpreter or compiler for even a simple programming language or domain-specific language, you’ve almost certainly used both the interpreter and the composite patterns.

suppose we have a very simple language for evaluating mathematical expressions and we want to write an interpreter for it. Using the classic compiler workflow, we’ll tokenize the language, parse it to produce a syntax tree, and then either interpret that tree directly or compile it down to a lower-level representation. for the purposes of this article, we will assume:

With that in mind, here’s a simple c++ program that represents expressions and evaluates them. I’ll show the code step by step to explain what it does; the full sample code is available here.

we’ll start with an abstract interface called expr that all syntax elements must implement:

and some simple expression types:

expressions such as constants and variable references are often called

expressions, since they do not contain other expressions within them. let’s add a more complex non-leaf expression:

note how binaryop implements the same interface as leaf expressions. its eval defers to the eval method of its left and right constituent expressions. it is an embodiment of the composite design pattern, defined as:

[…] describes that a group of objects should be treated the same as a single instance of an object. the intent of a composite is to “compose” objects into tree structures to represent part-whole hierarchies. the implementation of the composite model allows customers to treat individual objects and compositions uniformly.

in the language of the composite pattern, there is

classes, which are both

. in our example, a constant is a leaf, just like a varref. a binary operation is a composite. both inherit from expr, which is the

the core of the composite pattern manifests itself here in the uniform interface (expr) implemented by both constant (“individual object” in the definition quoted above) and binaryop (“composition”).

I’m not a big fan of uml, but since we’re talking about design patterns, I couldn’t help it 😉 here is our class diagram described in uml. note the close conceptual resemblance to the uml diagram on the composite model wikipedia page.

let’s finally see these classes in action. Here is a main function that assembles a simple expression by hand and evaluates it. this is a toy for demonstration purposes; in a real program, the syntax tree would be built automatically, most likely by a parser.

the expression tree created by this code is: 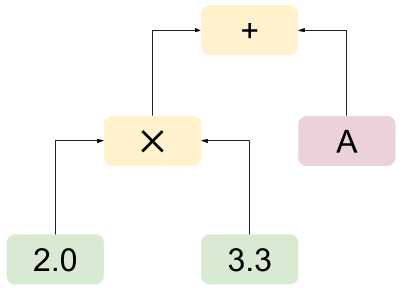 Finally, I’ll mention that while this example is very typical of a scenario where I usually encounter these two patterns, it’s by no means the only one.

the composite model has a life outside of the performers, of course. this is useful whenever a group of objects can be treated uniformly as a single object. for example, in the graphics world, we can have shape objects that can be moved, rotated, etc. ; we may want to treat a “group of shapes” the same way (move all shapes within it equally, rotate the group, etc.). this requires the use of the composite model where all shapes, as well as a “group of shapes” derive from a common component interface.

the interpreter pattern is useful whenever a problem can be described by a language of any type. some examples are sql or other logical query methods, regular expressions, many types of rule-based systems, etc.