Experimentation with materials and craftsmanship: the story behind Sher Maker’s design studio

Experimentation with materials and craftsmanship: the story behind Sher Maker’s design studio

The culturally significant city of Chiang Mai in northern Thailand is an area steeped in history and religion, preserving traces of walls, moats and temples from a past dating back to the 13th century. Between its lush trees and scenic landscapes sits the workshop and office of architectural design studio Sher Maker, a locally sourced space that accentuates the process and meaning of building construction. Their workspace is no different from their portfolio; Interested in the origins of architectural formations, the context of local materials and technologies, as well as the atmosphere that surrounds the building both physically and atmospherically, the team translated their design approach to create their own space of work. 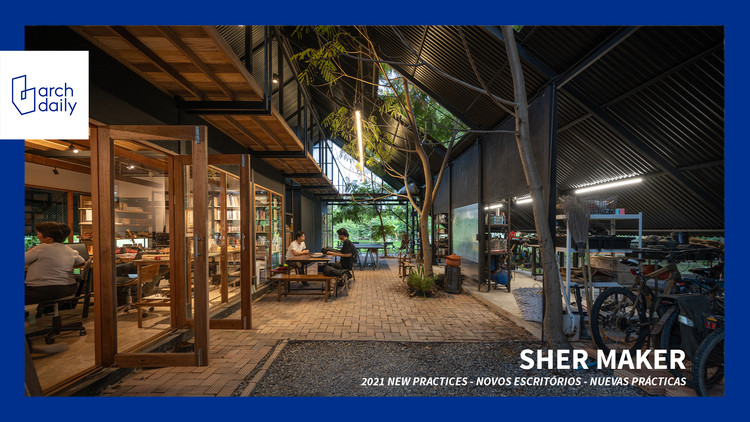 For Sher Maker, a good project is always carried out by a practitioner who embodies human qualities. Being a human nature designer means having the ability to capture elements related to people’s life, psyche, senses and empathy, and connect them to human experiences through design. Thus, for the team, the influence of geography and culture is an elemental resource and reason behind the design concept, not just the human aspect. Being open to the natural atmosphere and having a clear perception of each season’s weather conditions was very crucial to Sher Maker’s work environment, as it kept them in touch with the “real world” they worked with.

When designing their workspace, the team was looking for flat, empty land, which would allow them to build any structure and blend naturally into its surroundings. The only suitable ground they found was flat ground covered in acacia and yellow poinciana, so they developed their studio design and layout around these natural elements, leaving the natural sounds and temperatures of the seasons, the fragments of branches and even the dead leaves are part of the architectural experience.

The structure of the workshop was built from old wooden and steel frames. Some sheet metal was spread across the roof and extended down to the ground, floating arbitrarily above the original surface to enhance studio users’ concentration and conceal the interior space from outside distractions. Instead of using cladding materials to cover the roof, the team organized the layout of the studio to follow the orientation and lap of the trees on site, using them as normal cover for some of the interior spaces. .

The environment should embrace us. We really believe that a pleasant and mixed environment can facilitate the work of many designers. When we sit at work and feel all the atmosphere around us, there is a very strong possibility that we can understand and conceive similar spatial perceptions within our work. Among the many benefits is a pleasant environment that directly improves mental health, stimulates creativity and decision-making, and improves performance. It’s not just about being a great designer but also a good human being. –Sher Manufacturer

The space is divided into two distinct parts: the interior studio and the exterior workshop, each requiring its own spatial configuration according to its designated function, but perfectly blended to facilitate circulation and interaction between the two. The interior is divided into 2 floors, containing 3-4 work units used for material testing and furniture mock-up. The area under the eaves in front of the studio is set up as a workshop station for materials testing and construction work. The outdoor workshop consists of a long multipurpose room where the team works with hand tools and experiments with different materials. “Fluidness”, “adaptability” and “transparency” were key elements of the design concept, not only in terms of context, but also in terms of functionality and working environment. In the same lobby where the team holds client meetings, local builders develop their pieces and experiment with materials, emphasizing that the space is welcoming to all and everyone is treated with the same level of respect.

We truly respect the wisdom ingrained in local people and the way they worked and lived, not only to follow them blindly, but also to ask better questions related to geography and culture so that we can create the most relevant with people. –Sher Manufacturer

Although it was a personal project, they treated it the same way they would treat a client’s project. However, for their space, they started with intensive, almost obsessive research into different elements that were personally close to their hearts, such as the workshops and the selection of materials, whereas in a client’s project they start with a program and context assessment to begin with. the design process. In some cases, the two types of searches result in overlapping data. In one of their 2019 projects, the team needed to research the area of ​​a local ceramics factory and studio in Chiang Mai to renovate the facade of the PTT station. The project helped them put together a rich database of all things ceramic work, which prompted them to do more research on the physical characteristics of the soil in their area. With this, the team began testing floor color mockups by mixing colors from different sources, which were then sent to firing, resulting in unique bricks with smoke patterns. This experimentation resulted in an “obsession” with the diversity of soil colors, so the team began collecting many earthen elements from the neighborhood to extract different color pigments for potential projects.

Like any young design company, Sher Maker didn’t have an easy start, especially as the team insisted on maintaining their stylistic approach, design thinking strategies and work ethic. . Their process, which involves spending a lot of time on pre-production and researching materials, was not common in the industry; some customers were unaware of the benefits of this process before construction began. In terms of worker relations, communicating with the construction team and making them understand the value of pushing their limits and achieving their best potential was key for the team, ensuring that ultimately all the people involved in the project are proud of what they have accomplished.

This feature is part of an ArchDaily series titled AD narratives where we share the story behind a selected project, by diving into its particularities. Each month we explore new constructions from around the world, shedding light on their history and origin. We also talk with the architect, the builders and the community, seeking to highlight their personal experience. As always, at ArchDaily, we greatly value input from our readers. If you think we should feature a certain project, please submit your suggestions.

We invite you to check out ArchDaily’s full coverage of the curated selection of 2021 New Practices. As always, at ArchDaily we greatly value input from our readers. If you would like to nominate a specific studio, firm or architect for New Practices 2022, please submit your suggestions.